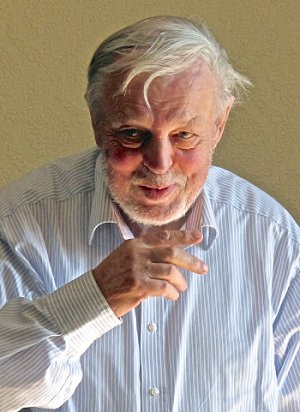 I first met Brian when he became a regular performer at Grimsby Folk Club in the late 1960s, after moving from his home at Washingborough near Lincoln to the little market town of Caistor in North Lincolnshire, to teach at the Caistor Yarborough Primary School.  He had already been playing for some time with the Lincoln-based folk dance band The Redwings, and his music was quickly recognized as a great asset to the club.  It wasn't long before he was invited to join the Grimsby club's resident group The Broadside where, together with myself, Bill Meek and Tom Smith, he formed the core of a band which, throughout the 1970s, recorded six albums and travelled the length and breadth of the country to play at festivals and folk clubs.

Brian's abiding interest was always the traditional songs and stories of his native county, and through his friendship with the folklorist and collector Ethel Rudkin, he introduced us and our audiences to the songs of North Lincolnshire village singers like Luther 'Luke' Stanley of Barrow-upon-Humber, and William Hill of Tetford - and to the treasure-house of song which had been collected in Lincolnshire by Percy Grainger.  He was also a great admirer and performer of Tennyson's Lincolnshire dialect poetry, and it was a pleasure and a privilege to see Brian in full flow, enacting the role of the chuntering old chap in The Northern Farmer, advising his errant son against courting the daughter of the impoverished parson:

Brian was a longstanding member of the English Folk Dance and Song Society, and a skilled musician on both accordion and fiddle - his knowledge of tunes and dances was one of the essential building-blocks supporting the formation of the Grimsby Morris Men, the Cleethorpes Folk Festival, the Plowgild Folk Dance Group and the Broadside Ceilidh Band.

There is so much to remember him for, but what sticks in my mind is the little personal things which made Brian such a character ...  He was no follower of fashion - his customary gig-wear was always topped-off with a baggy jumper in the winter, or a long-sleeved open-neck shirt in the warmer weather - and on a cold or rainy day, the familiar black beret would make an appearance ...

He would have no truck with PA systems, or New Technology, and I was deeply impressed with his 'designer visiting-cards' which consisted of small squares cut from corn-flakes packets, with his address hand-written on the back ...

He just loved to sing and play, and that was why he had so many friends - he would travel any distance to share his songs and stories.  It was always a struggle to persuade him to raise our Ceilidh-band's fees in line with inflation - we knew very well that Brian would rather play for nothing than not play at all ...

Long after the Broadside Band "retired from active service", Brian continued to travel, sing and play, not just in his beloved Lincolnshire (where he is reputed to have sung in every Village Hall in the county), but all over the country, from Scotland down to Cornwall, at gatherings of traditional singers and musicians.

Brian's voice has not been silenced - it lives on in the many old songs which he loved so much, and brought back to life in his performances. John Conolly - 6.12.13