The ancestral music of Galacia

Alalas are the oldest, purest and most characteristic musical forms of Galician traditional music.  Forgotten for centuries, and preserved only by popular wisdom, its treasure was recovered by poets and musicians of the romantic age. The origin of alalas, and their relationship with other musical forms, particularly religious music, have attracted the attention of musicologists for decades.  Numerous theories have been proposed, but the origin of these chants are linked to the very origin of Galicia, and fade away in ancient times.

The use of these chants as a Galician nationalist symbol often makes us forget that they show, basically, many points in common with other traditional songs representative of nearby cultures (Castilla, Southern Spain, Northern Africa).  We should note that Galician race was built as a complex mixture of Celtic, Mediterranean, and Germanic cultures, and although our music is said to be 'celtic' (whatever the confusing 'celtic music' term means) , it shares many features with non-celtic cultures.  Alalas are probably far from celtic chants (if we understand 'celtic' as Scottish or Irish), and closer to musical forms linked to the domination of the Iberian Peninsula by Germanic tribes, or the huge Arabic cultural input to it, without forgetting the vast influence of religious and profane music that arrived in Galicia via the Pilgrimage to Santiago de Compostela during the middle ages.

Many authors have pointed to religious music, particularly Gregorian chant, as a source for the genesis of alalas.  However, some others go further: Veres, Martínez Padín and Vicetto assure us that they were brought by Phoenicians, as songs that were sung for accompanying the pace of rowing (the songs were called 'alelohuías'). 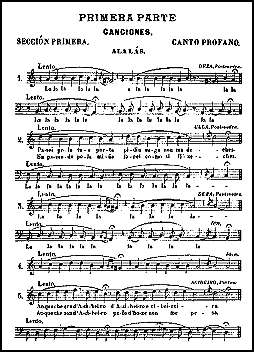 Other authors point suggest a Greek origin.  Santiago Tafall (a musician of the Compostellan Cathedral at the beginning of this century) also compares alalas with Gregorian chant.

Those collected by Casto Sampedro (see left) in his Cancionero (probably the most important compilation of Galician music) can serve as an example.  Number 1 is similar to the second Gregorian mode, and number 2 to the fourth mode, numbers 5 and 6 to seventh mode, and so on.

The Franciscan monk Luis Fernández notes connections between the melody of number 29 and a verse of the Te Deum, the one that starts with Sanctus.  We can listen to it here (midi sound clip).  Pedro Carro compares an alala found in the area of the Ulla

with the VII tone of the salmodia.  Let's listen to its cadence here (midi sound clip).

In short, these similarities between religious and popular music noted in alalas seem to be accepted by many experts on Galician music.  It doesn't appear strange that common people imitated the chants that were sung inside the walls of the monasteries during middle ages, adopting and modifying them for their own purposes.

Musical characteristics of the alalas:

Alalas are arrithmic chants, based on a single short theme that repeats its melodic intention several times, usually separated by some instrumental phrases played with the bagpipe or sung without words.  Melodies of alalas are usually diatonic, and based on a continuous drone.  The progressive adaptation of alalas to polyphony, by choral emsembles, imposed them modern characteristics, like harmonization and transcriptions into 2/4 or 3/4 tempo (rarely 6/8), or combinations of both.

The real melody of the chant is formed by the repetition of all its notes.  The first cadence is also the final one, ending in a coda that is enlarged and faded as a sustained and undefined sound.  This fact appears to be a very special characteristic of alalas.

The instruments that generally accompany the human voice in alalas (at least in modern times, in the way P Feijoo and his choir used to play) are bagpipe and percussion.  The bagpipe, usually in Bb tonality (gaita tumbal), plays along the whole melody, or only in the instrumental parts, when it usually executes variations of the original cadence with variable virtuosity, while singers sing long notes, 'til they both end with the same note.

The hurdy-gurdy, played in Galicia by wandering blind men 'til the beginning of this century, was also a very suitable instrument to be played while singing the alalas.  The teluric nature of its sound revealed a marvellous complement to human voice.  The recovery of many chants was made at the limits of their extintion.

Men like Perfeuto Feijoo or Faustino Santalices played a great part of this recovery work.  We can listen to Santalices in this old recording (1958) playing and singing the alala Lonxe da Terrińa (sound clip).

Alalas as a national symbol: their identification with Galicia

If it's true that traditional music can speak about the personality of a country, and there is no doubt that alalas represents the identity of Galicians.  Alalas were the echo of Galicia for centuries, and were specially adopted by the proto-nationalism at the end of last century, whose creators and ideologists considered them, along with instruments like the bagpipe, a symbol of our nation.  The alalas are the song of a mother for her child, or for the men that laboured at the countryside, the expression of happiness or love of the youngsters, and the sorrow and poverty of Galician rural society, the death or the emigration of the beloved people, and, overall, the nostalgic sentiment of morrińa, that we feel when we are kept away from all we love.  Poets like Rosalía de Castro, Curros Enríquez or Eduardo Pondal wrote lyrics to be sung as alalas, and during the 'Belle Epoque', many composers like Juan Montes or José Chané adopted the musical forms of these chants to create their own musical language.

Galician people sung alalas for centuries, till Galician identity was almost destroyed by Spanish influence.  Although traditional Galician music has experienced an enormous recovery, it fights to survive mass culture, and the lack of interest of Galician people for all that is old, unfashionable, and comes from the atavistic and rural enviroment.  The preservation of alalas is also the preservation of our cultural background, the very essence of our identity.  Let's keep these songs alive.