Catch It, Bottle It, Paint It Green CD / book 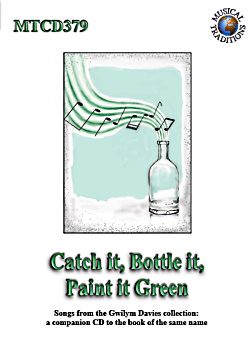 Whatever our involvement in traditional folk music, we readily acknowledge a huge debt to the successive waves of collectors, from the pioneering activities of Sharp, Vaughan Williams and Broadwood through to Bert Lloyd and more recent exponents like Mike Yates and Nick Dow (to name but two).  Gwilym Davies has since the early '70s been recording source singers, initially in his native Hampshire then subsequently in Gloucestershire and in the USA.  He has amassed around 1700 individual items - complete songs and tunes, as well as fragments and interview snatches - of which probably 900 are distinct songs.  (There are also a large number of videos in Gwilym's private collection ...)

The plan is that all the audio recordings will in due course be available to listen for free on the British Library Sounds website, but for the time being just 25 of them (23 songs and 2 tunes) are to be found on a new CD available from Musical Traditions.  This disc is to regarded as an essential companion to this book, in which Gwilym discusses his work and regales us with tales of his encounters with the "colourful characters" he met while collecting.

But there's more to this 200-page volume than just an entertaining and interesting read, for Gwilym's ruminations provide us with much on which to cogitate further.  To avoid any undue preconceptions or misconceptions, Gwilym has, with typical modesty, set out his stall thus: "This book is not intended to be an academic work, but simply my various thoughts on English folk traditions".  So, from the starting point of what folks consider "traditional", Gwilym recounts his experiences of song collecting in the context of community and ownership, and examines how traditions - and the concept of tradition in English folk song - have changed throughout the 20th century, the classic songs and ballads being increasingly supplanted by an even broader "acceptable repertoire" (to the point where "rock'n'roll is simply the new folk music").

Gwilym's style is very readable and companionable, to the extent that he really brings alive those "characters" whose songs he has recorded.  And, importantly, Gwilym's book plugs another gap in our knowledge by affording us a real insight into the working practices of a modern-day collector - indeed, what makes him tick (as a well-regarded singer and musician in his local region).  Gwilym's unbridled enthusiasm for his task cannot be denied, and neither can his undying, humble gratitude and respect for those from whom he has collected.

After the book's text comes a 60-page Appendix, which contains transcriptions of all the items included on the above-mentioned Musical Traditions CD, together with the book's Index.

All told, this is an important addition to the corpus of books about folksong collecting, and as such deserves a place on your shelves.  Oh, and I must decline to explain the book's title - suffice to say, it revolves around the punch-line of a joke ...