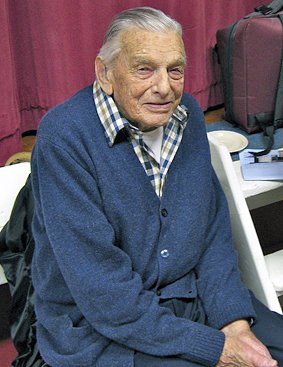 Stan Seaman, traditional melodeon player and skilled rope-worker, died on 9th June at the age of 93 in Southampton hospital after a bout of pneumonia.

Stan was a true community musician and was a vital part of the local entertainment around the New Forest in Hampshire for almost eighty years.  He was always asked to play for his friends, at weddings and anniversary parties, for functions arranged by the local gentry, at fetes and local shows and of course in the pubs.  He also played at the National Folk Music Festival in 1995, at Sidmouth Festival in 1997 and English Country Music Weekend in 1999.

Stan was born in 1919, a few miles down river from Buckler's Hard, on the edge of the New Forest in Hampshire.  Part of the Beaulieu estate, Bucklerĺs Hard was, in its heyday, a very important shipbuilding centre.  There were three Bucklerĺs Hard ships in Nelsonĺs fleet at the Battle of Trafalgar in 1805.  Stan moved up river at a very young age and grew up in Bucklerĺs Hard surrounded by family: ôTremendous family we had.  When I was born I had a great-grandfather, a grandfather, grandmother, twelve uncles and great-uncles all living in Bucklerĺs Hard.  They all stayed there - no one left.ö

It was inevitable that Stan would have a keen interest in the river, boats and the sea.  An only child, he was Ĺworkingĺ on the river at the age of seven, with his uncle Fred Hendey, who ran a local boatyard, and the harbourmaster Frank Downer, ferrying people out to their yachts or helping to bring in them in from their moorings out in the river for repair or refurbishment: ôI spent all my spare time on the river, and could splice and do most things by then.ö

At fourteen he left school to work full-time for the Beaulieu River Sailing Club.  By the age of seventeen he was skippering yachts and totally responsible for peopleĺs weekend sailing.  Stan carried on yachting in the summer and working in boatyards in the winter until the outbreak of World War II.  He then joined the Merchant Navy as a winch-man on Admiralty salvage ships.  With his seagoing experience and working knowledge he progressed steadily through the service, ending as Chief Engineer.

After the war he returned to Bucklerĺs Hard, at first working in the local boatyards before moving on to work: ôOn the biggest pile drivers in the world.ö  Stan worked across the Solent region, including on the tanker jetty for the Esso oil refinery at Fawley.  He also worked in Holland.  ôIĺve never been off the water.ö

In 1886 a reading room was given to Buckler's Hard by Lord Montagu.  This is now incorporated into the bar in the Master Builderĺs House Hotel (where you can see one of Stanĺs nautical knot-boards).  Here local people gathered for their hops where they would dance and sing for each other's entertainment.  They all had their Ĺparty piecesĺ - songs or tunes that they were known for.  Many of Stanĺs uncles played Ĺmusicsĺ (a term they used for any musical instrument played at Bucklerĺs Hard).

Stanĺs musical career began at the age of four when he ôhad a tune out of a melodeon,ö and he first played in public at the age of five, for a dance in the reading room amongst friends and family.  He has been much in demand for his playing ever since, moving on from single row to two row melodeon, then piano accordion and on to keyboards to keep up with the changes in popular music.  His huge store of tunes stemmed mostly from those early days but, in common with many other country players, he picked up many tunes for which he had no name.  Some of these seem local to the area.  He was always quick to learn the latest popular tunes knowing that they would be demanded by his audience.

In 1993 Vivien Drake, of the Countryside Education Trust based at Beaulieu, asked Stan to come out of musical retirement and talk about the old days on the river and show some of the intricate knot and rope work at which he was so skilled.  (Stan rigged the yachts for Sir Francis Chichester and Sir Alec Rose for their circumnavigations of the world.)  Whilst there Stan mentioned that he could play some of the old sea shanties on the melodeon.  Many of these he had learned as a youngster from Frank Downer the harbourmaster, who had run away at the age of 14 to serve his time on Square rigged sailing ships.

Stanĺs playing of these old tunes, along with tales of the village hops during the '30s and '40s, inspired Vivien to try and recreate those times.  So, with the help of his musical colleagues and friends, the first hop was held at the Master Builderĺs House Hotel, Bucklerĺs Hard, in 1994.  It was a sell-out and so successful that a second hop was held at Beaulieu Village Hall in 1995.  This also sold out.  The village hops continued at Beaulieu for a few more years.

Similar musical evenings have continued.  In 1997 Stan set up a regular 'musical social evening' which brought together many of the older traditional musicians from the Forest.  Originally held in the 'pigsty' at the Countryside Education Trust in Beaulieu they moved to the village hall in East Boldre after a couple of years and have continued monthly ever since.  Held there on the 3rd Saturday of the month for a paying audience, there are regularly 15-20 local musicians playing a wide range of traditional and popular music on all types of instruments: fiddle, accordions, melodeons, mouth-organs, mandolins and songs.  Some of the players and many of the loyal audience had been at school with Stan and had supported his musical events ever since. 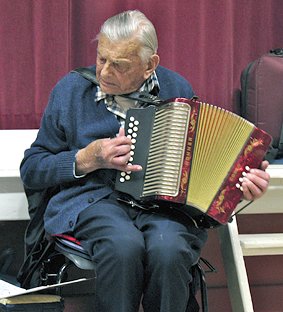 Apart from his war service Stan lived within a few miles of his birthplace all his long life.  He had a phenomenal memory and was always willing to share his recollections, skills and music.  He recorded over 60 hours of memories and tunes on cassette which he gave to the archives of the Historical Society at Beaulieu and he always sent copies to his friends.  On several of them Stan recorded himself double tracked, playing along with himself on melodeon and banjo- mandolin, two melodeons or melodeon and mouth-organ, all the tunes linked with Stan's memories.

I first met up with Stan in 1994 and have been privileged to play with him on many musical occasions and call him a friend since then.  In 2006 a cassette of my recordings Village Hops in Buckler's Hard was released on Forest Tracks.

Stan was still playing regularly up until last year.  Despite being frail he managed to come along to the East Boldre evening in February and play at his 93rd birthday party.  Stan will be greatly missed by his many friends and by all those who've enjoyed his company and his music over the years.  There'll never be another!

Dave William's article for Musical Traditions MT006 : A few personal thoughts on the social dance, its music and musicians, in a rural environment over the last half century - and a profile of the New Forest accordion player: Stan Seaman, can be read here.