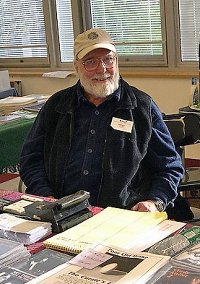 Charles Alexander (Sandy) Paton was born on January 22, 1929.  Due to his father's work in the Coast and Geodetic Survey, the family moved quite a bit.  Sandy eventually found himself in Washington D.C. where he studied art, but the classroom wasn't for him and soon he was in Seattle where he continued to paint and also took up acting.  While in Seattle during the late 1940's, Sandy was introduced to folk music and got hooked.

During the 1950s Sandy traveled the country playing guitar, and in 1957 he was in Berkeley, California when he met the woman who would become his wife, Caroline Swenson.  The couple would travel to England where Sandy performed in clubs and coffeehouses.  They also recorded as a couple as well as some solo recordings from Sandy.  Their interest in folk music continued to grow, and they became friends with noted collectors Hamish Henderson and Seamus Ennis, as well as trtafitional singers like Jeanie Robertson and Lizzie Higgins.  The Patons were on their own journey collecting and learning folk songs..

They returned to the United States and Sandy continued to perform and record.  Caroline would sing with Sandy while she was raising the couple's two boys.  Sandy also felt the responsibility of raising his family and settled down to a 'real' job in Chicago.  He began working in a record department of a Chicago book store, where he introduced and began selling commercially released folk recordings.  The life the couple were leading in the Chicago area was nice, but they wanted more for their family.  After vacationing with friends in Burlington, Vermont, during the summer of 1961, the Patons decided to pack up and move to New England.; they lived in Veromnt for six years, and then moved to Sharon, Connecticut.

Sandy also took some time to go on a collecting trip to the Appalachians where he collected and recorded songs from Frank Profitt (the source of Tom Dooley) and Horton Barker.  Sandy played these recordings for a folk music friend they met in Chicago, Lee Haggerty.  Lee was impressed by the recordings and suggested that they form a record company to release their own LP's of traditional music.  With financial backing from Lee and his sister, the Folk Legacy label was created.

Folk Legacy Records' first release came in 1961: Frank Proffitt, of Reese, North Carolina.  The company, now located in Sharon, CT, is still issuing new recordings as well as keeping the original catalog alive on CD.  Many of the releases were field recordings such as the ones Sandy collected from Frank Proffitt and Horton Barker.  The cornerstone for Folk Legacy has been the preservation of traditional music, but they also provided a home for a number of folk revival singers who shared a passion for the tradition.  The list of artists who have recorded for Folk Legacy include Rosalie Sorrels, Gordon Bok, Art Thieme, Joe Hickerson, Bill Staines, Jean Redpath, Michael Cooney and many others.  Through it all, Sandy Paton handled most of the recording, much of the writing of extensive and knowledgeable liner notes and the photography that adorns the album covers. The Folk-Legacy catalog numbers 140 albums by a diversity of folk music performers that chronicle the history, joys, loves, concerns and sorrows of folk in the United States, Canada and the British Isles

Over the years, that Patons have continued to make music and performed with their sons David and Robin at festivals and events in New England.  They made half-a-dozen albums, two of them award-winning children's albums, out on their own label.  They were also named Connecticut's 'Official State Troubadours' in 1993.

In an age where 'number of units sold' seems to dictate what and how music is made available, it is refreshing to see a company that looks at quality and maintains a vision for the future.  Lee Haggerty passed away in 2000, but Folk Legacy continued to be operated with a hands-on approach by Sandy and Caroline and their children.  Their hard work, reputation for quality, and ability to share their music has created a unique recording label. .

Sandy Paton passed away on Sunday July 26 around 6:30pm.  Caroline and sons, David and Robin, will be continuing the Folk Legacy Records tradition.