Paddy Fahey of Killaghbeg House, Kilconnell near Loughrea, County Galway died on 31 May 2019.  His family reported that his death was in his 103rd year.  Fahey was a remarkable figure in Irish traditional music.  His compositions, all titled 'Paddy Fahey’s', were probably better known than the man himself.  Built around arpeggios and inversions, with strong modal qualities, their unique characteristics make them easily recognisable as Paddy’s work.  He was never recorded commercially and many of his tunes only came into wider circulation with the publication of a doctorate thesis by Maria Holohan published in 1995.

Paddy Fahey was born into a musical household and took up the fiddle around the age of 5 years, just picking up an instrument that was available in the house.  His father Jack Fahey encouraged musicians to visit and play at the house and the Aughrim Slopes Ceili band used to play regularly at Killaghbeg house.  The band included fiddle players Jack Mulkere and Paddy Kelly, both influential players throughout Clare and Galway in the 1920s and '30s and these two players featured on 78rpm records of the band recorded in 1938 in Dublin.  In his mid-teens Paddy and his sister Jennie both joined the band, this would have been in the early 1940s.  The Aughrim Slopes enjoyed wide acclaim from the late '40s into the 1950s including tours of Britain and America, but Paddy and Jennie retired from the band in 1956 when their father Jack died. 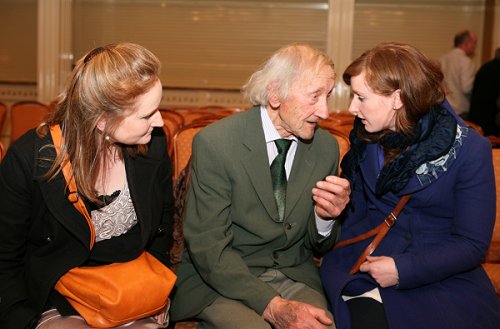 It’s hard to say how Paddy started composing his own tunes in the time after he left the ceili band.  Possibly he was influenced by Paddy Kelly who is known to have written a number of tunes popular in the modern repertoire such as St Ruth’s Bush, The Corner House and The New Custom House.  Fahey also played alongside Paddy O’Brien from Nenagh who composed a large number of tunes.  Whatever their origins, Paddy Fahey’s reels No 1 and 2 and Paddy Fahey’s jig were well known by the mid '60s.  In more recent years his music has been championed by fiddle players and others such as Joe Burke, Claire and Breda Keville, Liz and Yvonne Kane, Seamus Moloney, Liam Lewis, and Martin Hayes.  Just about all the tunes in the Holohan thesis have been recorded in the last 20 years.

Paddy Fahey was an extremely accomplished fiddle player and private tapes from the 1960s and '70s show him playing in a robust rhythm, not too fast, with strong bow-work and neat rolls.  What is very striking about the playing is the way Fahey puts modal variations into well-known tunes to create something unique and very much in the same mood as his own tunes.  He wasn’t different for the sake of it, it seemed that was how he heard or felt the music.  His playing of the Irish Washerwoman never ceases to amaze and inspire.

Fahey’s tunes do not fit the conventional character of Irish dance music, they are more listening pieces due to their structure and use of unusual notes, particularly the Bb that he seemed able to slip into several of his tunes as a variant or variation.  His tunes are unmistakeable and his own playing of them often brought out new twists and variations.  In later years his declining hearing meant he wasn’t seen out playing much.

Our own encounters with Fahey revolved around the Cooley Collins festival every October in Gort, Co Galway.  Paddy, neatly dressed in suit and tie, would wonder round the Saturday night sessions looking, as he told us, for good fiddle playing.  If he found music he liked he’d sit and listen as he drank a small glass of orange juice.  Many musicians would play one of his compositions as he came in as an act of recognition.

Fahey’s skill as a composer was recognised by Comhaltas Ceoltoiri Eireann and TG4 and the accompanying photo of Paddy in conversation with Breda and Claire Keville was taken at a local award presentation held in Gort in October 2012.

Survived by his wife Anne and son John, Paddy’s was buried on 2 June in the local cemetery.  His music will live even longer than the man himself.

As Ken and Marya suggest, Lucy Farr had a great fondness for the music of Paddy Fahy and was always full of praise; and alongside praise regaled us with the following anecdote ...  She had been in company with Paddy and others - probably in Loughrea where she played often with Paddy Carty during visits: I can't remember her telling us exactly where and when, but she was quite clear in her recounting.

She was flaking away at one of Paddy's tunes, proud to do so; and, knowing full well what she was doing, she finished the tune, turned to Paddy and, in an elliptical way, said "Is that one of your tunes, Paddy?"  Paddy, in the same elliptical manner, replied "I think so".