A volte ritornano - sometimes they return

one hundred years of Italian aspirations,
in the popular tradition

A CD of the above title (Dunya fy8018) arrived from Italy's Robi Droli label recently.  The performance style is so modern that a review in MT would be inappropriate, but the accompanying booklet is extremely interesting and contains much which bears on other recordings of traditional Italian music featured in these pages.  I thought it was well worth reproducing here as important background reading for anyone interested in Italian music and song.

Readers of my review of the superb 'Rice Girls' CD (Women of the Po Valley - Auvidis Ethnic B6846) may remember that I said that the songs of the two World Wars were the first truly 'Italian' folk songs - before that, they were merely regional.  To this category I should really have added the songs of the Risorgimento, the struggles of the 1830s to 1860s which eventually brought about the creation of the modern unified Italian state in 1870.

A volte ritornano covers a selection of these songs (in fact, one of them, Se otto ore [It's 8 o'clock] appears on both CDs), and points out that the events which these songs celebrate or condemn have been largely written-out of the 'official' Italian history.  “Those in power write the history, those who suffer write the songs” ... a worldwide phenomenon, it would seem.

"We will not find your memory - seeking it in history books
or great speeches that are nothing but hot air ... "

These lines from Partigiani fratelli maggiori (Partisan Older Brothers), a song from the post-war period by Michele L Straniero, with music by Fausto Amodei, would be reason enough for releasing this CD.

We, 'inexperienced younger brothers and sisters', could find no trace of our recent past in history books, starting from our fifth year elementary school textbook 'Al passo', published by Orizzonte, Milano 1957.  After dwelling for a considerable period on World War I, citing bulletins proclaiming victory on land, sea and air - with only a mention given to the numbers of Austrian dead - it then completely ignores twenty years of fascism, disposing of W.W.II with the words 'The Second world War was for us an unfortunate time, resulting in the painful loss of the whole of Venezia Giulia along with Istria and the Dalmatian islands which fell into Yugoslav hands, while several territories in the Western Alps were given to France'.

We continued to find no trace of those events in the text we used in the last year of middle school, and only a few anodyne sentences in the text of our last year of high school.  And for many years the school curriculum concluded with the end of the First World War.

Little by little we have begun to fill in the gaps, by listening to the accounts of our elders, observing the ruins of our bombed-out cities, through books and films.  Popular folk songs of struggle and protest have played an important part, not only in awakening people's consciousness to events which were for a long time blanketed in an uneasy silence, but also as a way of understanding the history both of our own and other countries.

These much-loved and listened-to songs were highly popular from the late '60s to the end of the '70s, even if for some it was just a question of fashion.  We waited religiously for the next release from Dischi del Sole, behind which was the Ernesto De Martino Institute, and the research of great scholars like Bosio, Leydi, Coggiola and Bermani ...  We attended the shows of Giovanna Marini, Dario Fo, Ivan Della Mea and Paolo Pietrangeli to mention just a few who performed those songs on stage, in bars and in the streets.

Even TV and radio eventually cottoned on to this explosion of popular folk culture - sometimes exploiting it for their own dubious ends.  How many knowing winks to the people and how many improbably crass folk songs did we have to stomach in those years when the triumph of consumerism dragged even the most serious popular music into its whirlpool?  Times had in any case changed.  With the arrival of armed struggle, nobody really felt like singing.  Nor did they in the rapacious '80s.  The Ernesto De Martino Institute, kept going only thanks to the support of a few generous individuals, risked closure for lack of funds at a time of otherwise reckless public spending.  Listening to those songs within the confines of our own homes in the company of old and trusted friends began to seem like some crank conspiratorial gesture.  With their eccentric listening habits, the younger generation began to look on us with ironic affection.

We 'inexperienced younger brothers and sisters' had become veterans, yet we had been unable to pass on that history of the 'other Italy', which these songs kept tenaciously alive, to the next generation. 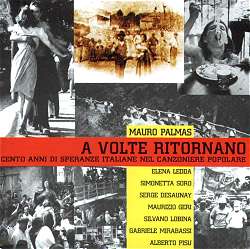 That is partly why this CD came about.  It isn't a nostalgia trip, one of those countless celebrations that try to re-evoke the '68 revolution.  Nor is it a philological exercise, collecting these songs for the benefit of a few connoisseurs.  Its aim is rather to allow younger generations to discover that history which has never found a place in their school textbooks, that voice of the people which always risks being stifled by the official versions.

The songs on this CD cover events stretching from the Risorgimento to the Second World War, beginning with the Garibaldi uprising and the impassioned if naive words of Camicia rossa, ornate, dear, ardent and well loved as any woman.  It's a colour which puts fear into the heart of the enemy, emboldens the garibaldino with the certainty that it won't be long before he and his companions arrive in Rome.

The epic tone continues with the sweetly melodic Rondinella d'Aspromonte.  Here it is not the Risorgimento of our aforementioned school textbook we hear, which bundled together Garibaldi, Cavour and Vittorio Emanuele.  It is the voice of that 'other' Italy, that of the windblown leaflets (which continued to be a common sight during the first half of this century) that were read out by a privileged few to the illiterate masses whose own history and memory were entrusted to song and oral narrative.  This song recalls the order given to his troops by general Cialdini in Aspromonte on August 29, 1862 to open fire on Garibaldi, who had ordered his own men not to shoot ...

'I got two bullets from a carbine for my trouble', writes Garibaldi in his Memoirs.  The author of Rondinella d'Aspromonte forever branded minister Rattazzi as pitiless and called Vittorio Emanuele a tyrant for giving his consent to the action.  The wounded Garibaldi was incarcerated.  The event caused an outrage throughout the whole of Europe.  The wound, enlarged to mythical dimensions, became the subject of other popular songs such as Garibaldi fu ferito, fu ferito ad una gamba (Garibaldi was wounded, wounded in the leg), in memory of the compassion and loyalty of their hero.

But these songs carry with them other images of struggle.  The fragile political unity of our country was achieved at the expense of the working classes who at the beginning of this century were struggling for an eight hour working day in an Italy where women, and especially children, were forced to work from dawn to dusk, with neither protection nor rights.  This situation is the reason for the discontent of the author of Son Cieco, who nonetheless proclaims the inevitable triumph of socialism.  These were the first difficult fifty years in the life of the realm, years which saw the migration of millions of people overseas - five million alone to the US - a desperate, poverty-stricken tide of humanity.  Third-class passengers who dared to cross the ocean to escape their miserable conditions who found themselves bound for 'Merica', having never before ventured outside their native villages - and with no assistance from the Italian government.

And yet it was the remittance of these emmigrants which enabled Italy to stabilize the balance of payments to foreign powers.  This exodus provides the theme for another popular song, Italia bella mostrati gentile, (Beautiful Italy, show a kind face).  Two work songs, So stato a lavorŕ a Montesicuro (I went to work at Montesicuro) and Saluteremo it Signor padrone (We salute the almighty boss) recall the exploitation of farm workers driven to gruelling labour in the rice-fields - exploitation which was to continue throughout the century.

Another highly emotional battleground is the Great War, a war which was highly unpopular and which left 600,000 dead.  The young girl of Regazzine, vi prego ascoltare (Little girls, please listen to me) sings of her grief at the loss of her boyfriend while Fuoco e mitragliatrice (Smoke and machinegun fire) evokes the sites of numerous massacres: Razzi, Monte San Michele, Monte Capuccio ...

Gorizia, an openly anti-war song, recalls the slaughter that took place between the 9th and l0th of August 1916, costing the lives of 1,759 officers and around 50,000 men on the Italian side and 862 officers and 40,000 men on the Austrian side.  Painful memories.  48 years later in 1964, at the Spoleto Festival, Gorizia was sung during the show 'Bella Ciao', where it caused great irritation to many to be reminded of the massacre that resulted from the taking of the city.  On that occasion two officers deemed it "an insult to national honour" and the whole cast of the Nuovo Canzoniere Italiano were denounced.

Other songs appeared during the Second World War (one of which is cited at the beginning of this text) as a moment of reflection on the violent and overpowering events that had just occurred.

Finally returning to the grand ideals of the Risorgimento, where the circle appears to close, are the numerous songs that sprung up during the war of liberation which testify not only to the dangers and terrible difficulties that confronted the partisans, but also to the boldness with which they faced them and to their awareness of fighting for what was right.  They fight 'contro la schiavitů del suo tradito' (against the slavery of your betrayal), in the words of Liguria, the battle hymn of the 3rd Garibaldian Assault Brigade, who were almost entirely wiped out in April of 1944, with its proud 19th century-style refrain, Siamo i ribelli delta montagna (We are rebels of the mountains) ...  And not forgetting Bella Ciao, the most well-known of the songs of the Resistance, which borrows musically and textually from many earlier popular ballads.

A sign of the musical vitality of these songs which guarantees their continued place in popular tradition is that over the centuries the same music has continually been used with different words, as is the case with Cassisia agghia 'intu, a Sardinian song that first appeared during the Spanish war of succession (1700-1714).  To the fatalism of those distant years, summed up in the line: "Whoever the victor, for us it makes no difference" (whether it be Filippo V or the Emperor Carlo), are added a few words of hope - Karl Marx, with firm conviction, said to the workers "If you are united, you will win."